The value conversation is where value pricing theory goes to die. The difficulty in mastering this conversation is what causes most people to give up on value-based pricing completely and revert back to selling time and materials. It needn’t be so difficult, though. 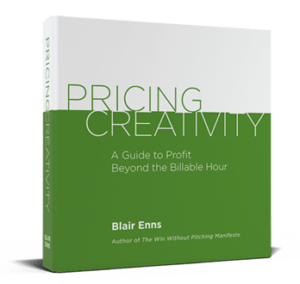 There’s a hack to the value conversation that a successful former client of mine pointed out after reading the manuscript of Pricing Creativity: A Guide to Profit Beyond the Billable Hour. When he explained it to me over dinner I thought, “This is brilliant. I should put it in the book.” In the end I didn’t include the hack because I feel strongly that mastering the value conversation is one of the most valuable skills in all of business–a skill that can transform careers and businesses. So, while encouraging you to learn that skill, I’ll now give you the shortcut. But first, some context.

Perhaps the Most Valuable Skill in Business

There are three tiers of financial success in a creative firm that I can correlate to pricing strategies. The lowest tier of true financial success is occupied by the efficient cost-based pricers–those firms that bill as many of the available hours as possible. An efficient firm might bill around $200k in adjusted gross income (AGI) per full-time equivalent employee (FTE), whereas the average cost-based firm might bill around $140k in AGI per FTE.

The next tier of success is where you find the value-based pricers—those who charge based on the value to the client and not based on their costs or inputs of time and materials. These firms escape the limits imposed by the pursuit of efficiencies, moving their AGI/FTE number north of $200k, into $250k and maybe even the $300k range.

The very highest tier of financial success, however, is reserved for those value-based pricers who master the value conversation. These firms can push into the $400k range and beyond, with no real theoretical limit. A well-facilitated value conversation not only has a profound effect on the income of the firm, it creates more value for the client and it is a thing of beauty to behold. I consider it to be one of the most valuable–perhaps the most valuable–skill in all of business.

Here’s the simple four-step framework for facilitating the value conversation:

There’s lots of nuance around the “how” of each of the four steps above, but it’s really that straightforward. You’ll notice that by the end of the value conversation you haven’t even begun to think about solutions. Your entire focus is on the client: what they want, how you’ll measure their success, how much value you might create for them, and finally, some initial ideas on what you might charge for helping to create such value. After this conversation you retreat to think about costs and solutions, building and pricing your proposal accordingly, while following the rules set out in Pricing Creativity.

The Reality: Few Get There

So why are there so few firms mastering what seems like a simple conversation and moving to the highest tier of financial success?

The reasons are many:

All of these reasons and more make a value conversation hack so valuable. So here it is…

Early in Pricing Creativity, I tell the story of the first time I saw a one-page proposal based on value rather than inputs. It was the principal of that firm that I found myself having dinner with while the book was in pre-production. Commenting on the manuscript he said, “You left out my hack!” What did he mean, I asked? He replied that he never mastered the value conversation. (Chapter 9: Master the Value Conversation–to me, perhaps the most important chapter in the book.)

Instead, early on in the sale–much earlier than I would advocate–he would put a one-page proposal on the table with three options. But he didn’t view this proposal as the final one. In fact, he said that the initial proposal was never the final one. It was only there to serve as a catalyst for discussion over what the client really valued. The hack, according to my client, was to put at the bottom of each option, “Choose this option if X is important to you.” X might be speed to market, customer service, low risk, knowledge transfer or anything else. He would then ask the client, “Which one of these options is the most appealing to you?” The client would point to one and in doing so reveal what he most valued. This would direct the conversation. “Ahhh, so educating your team as we develop the product (or program) is something important to you?”

In this way the early proposal lead to a more targeted value conversation in which the client and the firm could talk through specific value drivers that the client had revealed by simply pointing to an option, all while framed by the context of the initial prices. The discussion would result in the firm coming back with another proposal more specifically targeted to what the client most valued.

To Hack or To Hold Firm?

As someone who values rule breaking as much as I do rule making, I love this hack while I simultaneously worry about sharing it with you. There is no substitute for mastering the value conversation. I’ll repeat that I believe it might be the most valuable skill in all of business, but I also know that the size of the gap between those who understand value pricing and those who truly implement it is problematically large, especially in the creative professions.

As I craft this parting advice I find myself wondering what I would do if I were in your shoes (Win Without Pitching is a productized service business–we don’t value price the way a customized service firm like yours should) and I don’t think I would deviate from proper sales process and a good value conversation. But not all value conversations are good and easy, especially in the beginning. And like all good hacks, I would keep this in my back pocket for those situations where I saw that an elegant theory was clashing with my harsh reality.

So use at your discretion. If you do try it, I’d be interested in hearing how you make out.

Over 20 years, I’ve heard a lot of success stories from people who have implemented our advice. This post is for everyone else—those who haven’t been able to make Win Without Pitching work for them.

Are RFPs the Spawn of Satan?

I’ve written previously on the steps creative firms should take, but here I’m suggesting we finally call bullshit and throw out the RFP altogether.